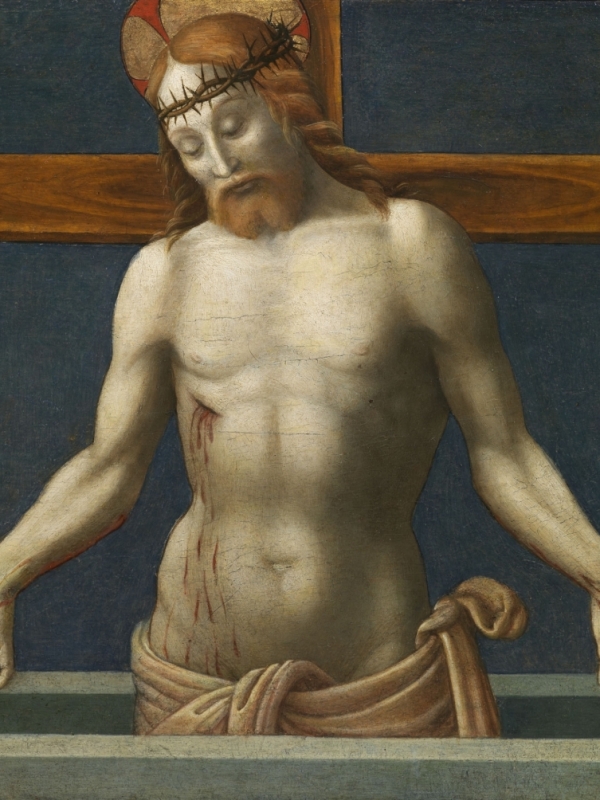 Depicted as rising from his tomb, Christ is shown in half-length figure with a pale grey skin. He is portrayed with a thick red beard and curly hair falling down on to His shoulders. Adorned with a red and yellow cruciform halo and a crown of thorns, His head is leaning, as to show his suffering. Blood is dripping from the open wound on His side and from His hands while He extends His arms, marking His submission. Depicted with a lean muscular body partly covered by a white cloth, Christ is standing in His tomb with behind him, the Cross on which He was crucified. Although He is unquestionably dead, energy is emanating from His slightly turned body, closed eyes and open arms. Depicted just after His crucifixion and subsequent Death, He seems to be about to resurrect.
Professore Andrea de Marchi attributed this work to Giannicola di Paolo, a pupil of Perugino, probably active within his Perugian workshop whose style and technique were, as for Raphael, tremendously influenced by the Master. The way Giannicola di Paolo constructs his works, the typology of the figures he depicts, the use of perspective and shades all are deeply indebted to Perugino. The present picture is much representative of Perugino's ideals and the exceptional symmetry of the composition is one to be expected by one of his finest students. The relation to space is rational and simple with the work organized along three planes; foreground, middle ground and background. This uncomplicated and lucid arrangement of the composition reveals the centre of the narrative action with the ample sculptural figure of Christ gracefully posed within His simple tomb and in front of His cross, both acting as a frame to the image and the narrative. The harmonious space is tightly controlled with the unified background giving the impression of infinite space.
The work here is much resembling Perugino's Cristo in pietà (1493 -1498), previously in the Capella of the Palazzo dei Priori and now in the Galleria Nazionale dell'Umbria; the sculpted imposing body of Christ, His extended large hands with open-fingered gestures that seem to translate His suffering, His well-modelled inclined face marked by His pain all are highly similar. Both works are very realistic; the head and body are rendered with much sensitivity and clarity and the whole scene is accentuated with a subtle chiaroscuro with touches of shade creating this real sense of perspective Perugino is reputed for. In both cases, the composition is bathed in a mysterious atmosphere that grants the work a pathetic feel, perfectly in accordance with the depicted scene. Other comparisons can be drawn between the Christ in this picture and with Perugino's Man of Sorrows with Saint John the Evangelist and Saint Joseph of Arimathea (1470 - 1490) previously in the Chiesa di San Pier Maggiore in Florence and now in the Collection Cassa di Risparnio of the city; the modelling of the Christ's inclined face with a long thin nose, slightly parted lips, short beard, closed eyes and marked cheekbones are undoubtedly much similar. Perugino's earlier representation of the subject (1470 - 1472), now at the Musée du Louvre also corresponds well to this work in terms of construction.
According to Vasari, Perugino always made use of cartoons as a basis for his creations. Taking advantage from the existing model, the artist then repeated his compositions in order to satisfy the broad number of commissions he received. Yet, it has been hypothesized by Catherina Higgitt, amongst others, that Giannicola had access to Perugino’s modelli which he copied to make his own drawing. That two highly similar works both by the hand of Perugino and by his pupil exist, is therefore not astonishing.
Yet, this work accurately represents the personal style Giannicola di Paolo developed beyond Perugino's influence. The physiognomy of Christ here is close to that of the Saint Sebastian in the Ognissanti Altarpiece (1506 - 1507) created for the Chapel in San Domenico and now in the Galleria Nazionale dell'Umbria; they have the same stylised contours, straight noses, individuated curling tresses and simplified arched eyebrows. They also have the same brownish lines between their lips and the artist uses a greyish contour between their fingers in both works, sometimes strengthened to make a contour with a blacker tone. Giannicola di Paolo is said to have partly evolved from Perugino's technique, approaching himself from another of his pupil, Raphael. Here indeed, the representation of Christ's and the pure and judicious modelling of his body with his inclined head correspond the grave and majestic dignity of the Christ on the cross in Raphael's Mond Crucifixion (1502 - 1503) of the National Gallery in London.
Proposing a date around 1520 for this work seems feasible. At that time, Giannicola di Paolo was still working very much under the influence of Perugino, making use of a clear organization and avoiding excessive detail. Yet, his style had evolved and absorbed some of the influences of Raphael and of the High Renaissance. Giannicola would have created the present picture a few years after the Ognissanti Altarpiece (1506) and before the Adoration of the Magi (late first half of the 15th Century) in the Louvres. In terms of stylistic comparisons, it seems this work could have been painted about at the same time as Giannicola di Paolo's Baptism of Christ created in 1516 for the Collegio del Cambio in Perugia.