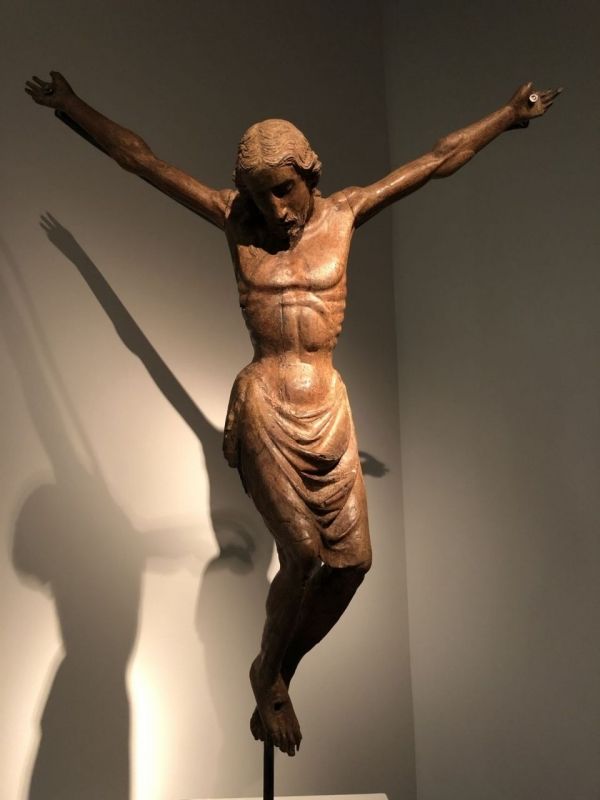 The elegance of the composition and the expressive delicacy that pervade the crucifix from the Bacarelli-Botticelli collection testify to the influence of one of the most accomplished experiences of Gothic culture in Italy during the first decades of the fourteenth century, that of the works of the Orvieto Cathedral.
In my view, the slender silhouette, the graphic design of the carving and the harmonic naturalism of the anatomy all point to the sophisticated work of the shop of Lorenzo Maitani, a master of Senese origins and an artistic personality of such strength and eclecticism that to this day art critics are divided on the sources of inspiration and influences that informed his artistic style. Maitani's work presents a more picturesque appropriation of classical influences than the rest of the Tuscan art of the period. He was referred to as 'Maestro sottile' [the Subtle Master'] by Pietro Toesca (1951) for his peculiar virtuosity in plastic production. Maitani is known to have worked in Orvieto in 1310 as chief-mason of the Cathedral, but he is thought to have contributed to the works even before his appointment. The four historiated pillars on the facade are undoubtably a powerful emblem of the innovation of the time, and reveal distinctive Gothic accents even as part of a wider, unitary project that depicts, from left to right, scenes from the Old Testament (pillars I-II), the New Testament (III) and the Final Judgement (IV).
The construction of the Cathedral began in the early Nineties of the thirteenth century, period of activity of Ramo di Paganello, an architect and sculptor from Siena who at that time was returning from an exile beyond the Alps – most likely in France, as testified by the French infuences of the reliefs attributed to him that are situated on the lower part of the internal pillars (considered to be the oldest). The upper part of these pillars, as well as the external pillars can be ascribed to theintervention of Maitani, confirmed by the undisputable stylistic relation to the six bronze Angels Holding a Curtain for which he was paid a commission recorded in a document from 1325. The group dominated the lunette of the central portal of the cathedral (now in the Museo dell'Opera) and surrounded a large Maestà in stone which has been attributed to the same author, and was likely sculpted a few years earlier in collaboration with the artists of his shop. Furthermore, this document allows to date to the third decade of the century not only the friezes on the external pillars of the Cathedral, but also three superb wooden Crucifix figures made by Maitani himself, or under his close supervision. Two of these are housed in the Cathedral – one in the Sacristy chapel, which is probably the oldest (ca. 1325), and the other in the Presbytery, which had previously been housed in the church of Sant'Agostino (ca. 1325 – 1330). The third Crucifix (ca. 1330) can be seen in the church of San Francesco. Just like the pillars on the facade of the cathedral described above, the resemblance between these wooden sculptures and the Bacarelli-Botticelli piece is telling: while the monumental characer of the cathedral works presents an accentuated verticalism, the organic, cutting tension and the sharp physiognomy of these pieces appear almost juxtaposable, especially in relation to the works from the Sacristy and the Presbytery.
In the work here considered, the choice of a harder wood for the figure – a fruit tree – reveals the artist's commitment to finding a style of lenticular carving of details. This practice finds other examples in the wood carving production in Orvieto between the end of the thirteenth century and the first third of the following century, including the imposing Christ Blessing, Enthroned (ca. 1330) of the Congregazione della Carità ('Charitas Congregation; now at the Museo dell'Opera). Our crucifix is also distinguished by the technical coherence in the execution of the head, inserted in the bust like the arms so as to allow reclining it on the chest to obtain a realistic effect. While preparing to further research to support the reflections here presented, the hypothesised dating 1325-1330 is implicitly supported by works from local epigones, including the Crucifix (ca. 1340) in the church of Santa Maria dei Servi and the Christ Deposed (ca. 1340-1350) in the church of San Ludovico. The carvings of these works appear tired and stereotyped in comparison with the vibrant Gothic mimesis of the Bacarelli-Botticelli piece.