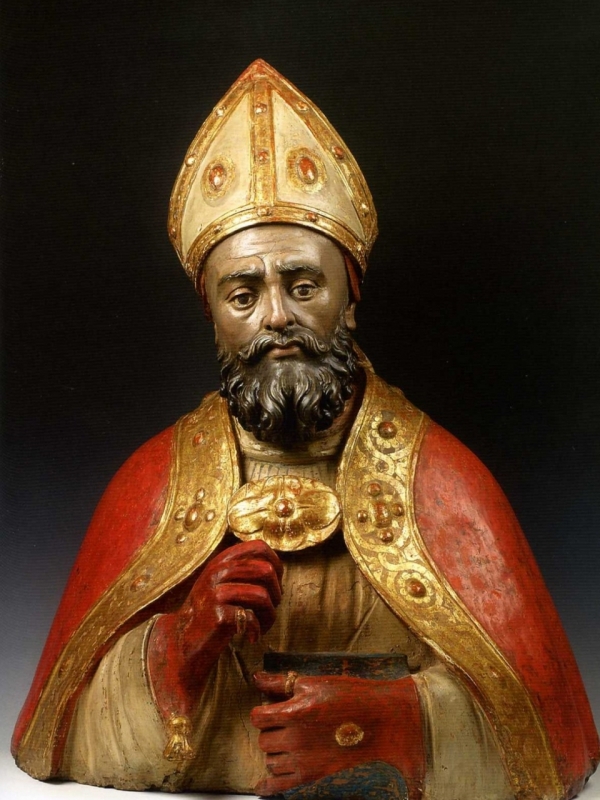 The skill of Agnolo di Polo in sculpting in clay is documented in this catalog by an additional evidence: the beautiful terracotta bust depicting a Bishop Saint, probably San Zanobi, protector of Florence, rendered in a full episcopal apparel, wearing the cope, the mitre, the precious gloves, and a book, held at the chest, to symbolise the doctrinal commitment of the sitter.
This monumental portrait bust is carved with extreme skill from a single block of clay, cleverly emptied in the back, and is beautified by a touching, naturalistic and well preserved polychromy. The mimetic skills, with which the somatic features of the sitter are modelled, and the sculptural sensibility that defines the rendering of the iconographic attributes – decorated with reliefs motifs and precious stones – both suggest the hand of a refined sculptor identified by Alfredo Bellandi in the Florentine Agnolo di Polo, one of the most important clay sculptor at the beginning of the XVI century acknowledged recently in the exhibition, held in Prato, for the 500th anniversary of the birth of painter Filippino Lippi (Filippino Lippi un bellissimo ingegno; origini ed eredita’ nel territorio di Prato, 2004), where the work of art was exhibited in the clay sculpture section of the show. Born into a family of artists – he learned his skills at a young age, working with the father, an accomplished wax sculptor specialized in portraits and funeral masks – Agnolo entered the Verrocchio’s workshop, as Vasari remembers us, where, together with Francesco di Simone Ferrucci and Lorenzo di Credi, he became an accomplished and faithful apprentice. The expressive capacity that we can admire in the two sculptures executed in Pistoia in the last decade of the XV century, a Maddalena (today in the Metropolitan Museum of New York), and the bust of a Redentore (today in the Museo Civico of Pistoia), are rendered in our sculpture with a sculpting vigorousness and a narrative sharpness that we find in the mature production of the artist, as in the works he made for the Spadari chapel in Arezzo. A quality retained through the extensive collaboration with Giovanni della Robbia, with whom he worked extensively at the Sacro Monte di San Vivaldo in Montaione. This Saint Bishop was realized at the peak of his artistic production, between 1512 and 1525, when he was fulfilling commissions from Prato, Borgo San Lorenzo, Florence and Arezzo. The execution of this sculpture is ascribable to the same timeframe of the decoration he made for the parish church of Borgo San Lorenzo (1512 - 1514), where he received commission for twenty two polychrome terracotta statues, among which, the Twelve Apostles, a full size Virgin, a Crucifix and also the portrait busts of Saints Francesco, Girolamo, Pietro, Paolo and four Doctors of the Church. All these busts, as an old church document tell us, were made in the same dimensions of our portrait bust, around 31 inches in height.